The Soutomaior Castle preserves a rich natural and historical heritage

The botanical park was created at the end of the 19th century, when the marquises De Vega de Armijo y de Mos decided to turn the castle into a neo-Gothic palace to be used as their summer residence. The marquises made great efforts to improve the gardens by creating paths, clearing the woodland and laying out the gardens. Their beloved niece, Maria Vinyals, who would later inherit the castle, was born there.

In 1935, the property was acquired by the Ostos y Ayala family, who looked after the garden and introduced new species.

In 1982, the castle was acquired by the Deputación de Pontevedra, which carried out an important renovation work, and opened the garden to the public so that everyone could enjoy its botanical diversity.

As we stroll around the park, we can appreciate the efforts made in the dissemination and preservation of the place. Every step we take we experience a new feeling. Species from all over the world have adapted to our conditions and now are growing next to our native flora and fauna. They are all part of this historical landscape: some trees are remarkable for their large size, others due to their age, originality or beauty, but three of them are particularly outstanding and now are included in the Xunta de Galicia's Catálogo galego de árbores senlleiras (Galician Catalogue of Monumental Trees): 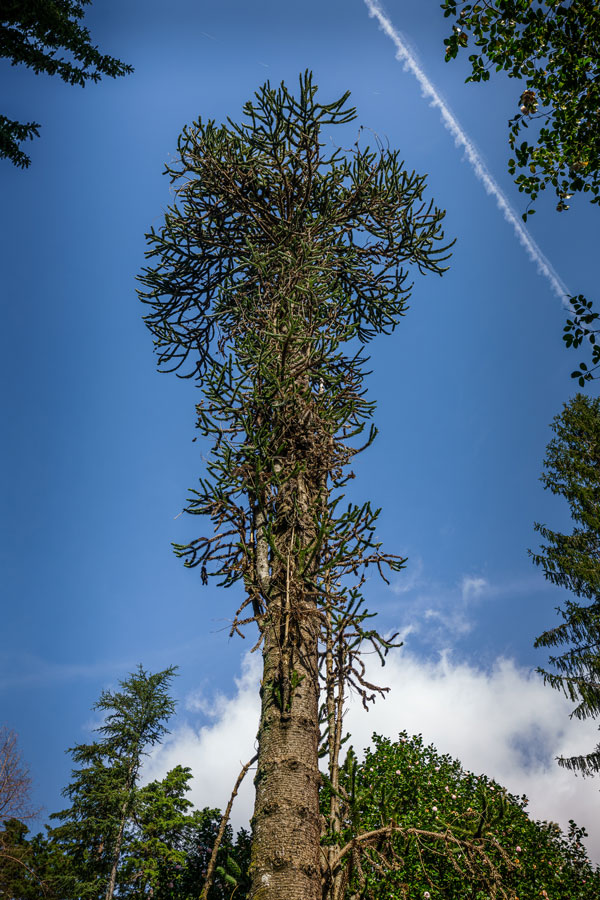 The garden has a large monkey puzzle tree about 25 metres high. It is the largest specimen in Galicia and was nominated as European Tree of the Year in 2019. It is planted in the centre of the botanical park, halfway between the pond and the Marquesa’s fountain.

It is one of the best examples of non-native trees in the Catálogo galego de árbores senlleiras. It has an outstanding morphology and, above all, adult specimens are rare in Galicia.

The species is native to the sub-Antarctic forests, which are found in the southernmost part of Argentina and Chile. In fact, its etymology refers to Arauco (Chile), where it was discovered.

It is an evergreen tree, with slow growth and great longevity, as it can live for more than 1,000 years.

It has a unique appearance due to its leaves, which is why it is also known as the ‘monkey tail tree’. Its bark, greyish in colour, is also very distinctive. Over time, wrinkles appear in the bark, which are also covered with ring-shaped marks, which are scars left by old branches. 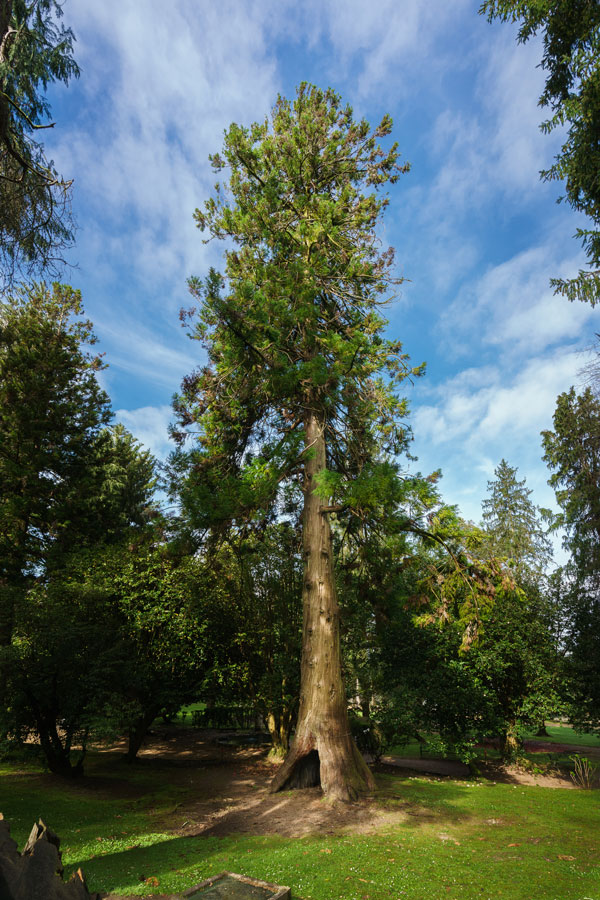 In our garden, there are several specimens of Japanese-cedar, but one of them deserves a special mention, and therefore it is part of the Catálogo galego de árbores senlleiras.

It grows at the top of the park, near the square of the fountain, and is particularly striking due to its originality and surprising shape. It is approximately 30 metres high and its most outstanding feature is its trunk base, which is completely hollow. This specimen is undoubtedly one of the most magnificent specimens of its species in Galicia.

It is highly valued as an ornamental plant both for its shape and size and for its leaves. Like almost all conifers, it is an evergreen tree, but the colour of its leaves vary depending on the season: it is green in spring and summer, but changes to reddish brown in autumn and winter; so as to protect itself from the cold and frost, leaves produce plant pigments that give it its coppery appearance. The colour change can be clearly appreciated in the Japanese-cedar cultivar Cryptomeria japonica 'Elegans', which is also growing at the botanical park.

The species is native to Japan, where it is known as sugi; it is often planted around temples as a symbol of the cultural and spiritual relationship with nature. There, specimens have their own name and are more than 1,000 years old. 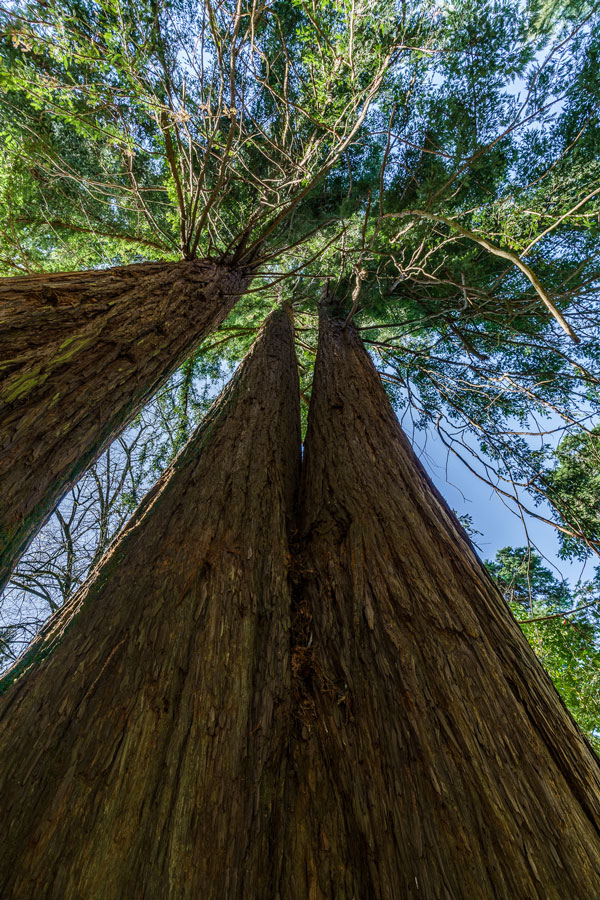 There are several specimens of redwood planted in our botanical park. One of them is particularly outstanding. Moreover, it is located in a privileged location, next to the Marquesa’s fountain. Being 41-metres high and with 9.5 metres of trunk perimeter, it is considered the largest California redwood in Galicia and, for this reason, it is included in the Catálogo galego de árbores senlleiras.

This magnificent tree is native to the western part of North America. It was named after George Gist, an Indian chief also known as Sequoiah and inventor of the Cherokee spelling book. The second part of the name, sempervirens, comes from Latin and means “always green”, as it is an evergreen tree.

But the most striking feature of this species is its shape. It can grow from one to two metres per year when it is young, reaching up to 110 metres (a 30-storey building). There is another redwood species called giant redwood, but despite their name, California redwoods are higher than giant redwoods, which tend to be wider.