The first documented reference to the sanatorium Lluria appeared in the Galician newspaper Faro de Vigo on the 8th June 1911. It was an advertisement on the “treatment of urinary system diseases and arthritis. There is in the park a spring of medicinal waters commonly used to treat the stone disease. The hospital is six kilometres away from the train station in Arcade. Address: Sanatorio Lluria, after passing by Arcade, Sotomayor”. It also mentions that the Doctor Lluria “having into account that for a large number of people Sunday is their only day off, he has decided to see patients every Sunday.” The advertisement concluded by saying that “a car will be sent to pick up the patients at the station in Arcade” so long as the visit was notified in advance.

This promotional message was the starting point of an ambitious project that was carried out thanks to the willingness of a Cuban-born doctor and the legacy and availability of his wife, María Vinyals y Ferrés.

For the creation of the hospital, Enrique and María first adapted the guests’ wing, which was outside the castle. However, the high demand would lead them to reform and extend the original structure. In 1911 they created “a restaurant for carers, visitors and patients” and also gave patients the possibility to an all-inclusive stay at the hospital for only 10 pesetas (the old Spanish currency) a day.

The promotion of the hospital in the media and Doctor Lluria’s reputation would bring about a rapid increase in the number of patients, which resulted in the addition of a new wing to the centre. In a letter that Enrique Lluria sent to his friend Joaquín Sorolla on the 20th March 1912, the doctor told him that they were to extend the hospital “since last summer all rooms were occupied, and some of them with two beds.” 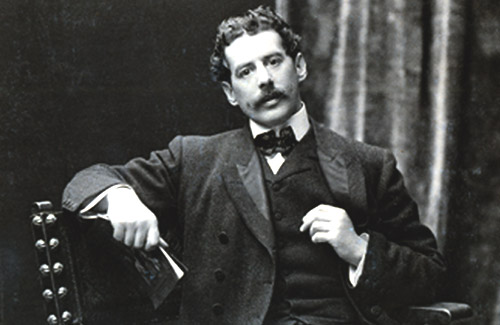 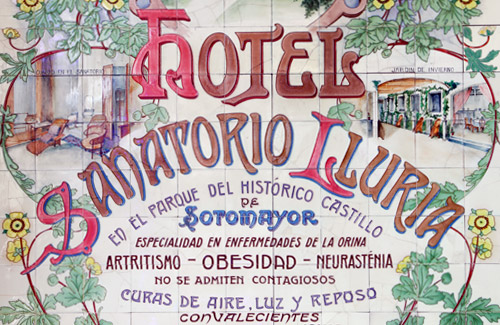 The number of patients continued growing, and in the late 1912, it was announced that the hospital would open “all year long”.

The construction works finished in the summer of 1913, and a great opening event, which was attended by important personalities of the time, was held. On the 15th July 1913, María and Enrique organized a party in the castle and offered their guests some appetizers in the gardens. According to a new promotional campaign, “neurasthenics will find a perfect environment, thanks to the privacy and relax they can enjoy in its gardens and the woods of pines, cedars and eucalyptus surrounding the sanatorium, as well as in its old chestnut groves. For literates and archaeologists, this is a wide area for research; and for naturalists, it has a remarkable plant diversity; for sports enthusiasts, it offers the possibility of enjoying lovely walks, going fishing and playing different sports.”

Thus, the hospital became a sanatorium, a centre for resting and recreation that offered more than medical care. Important figures of the Galician society as the Countess Pardo Bazán and her daughter Carmen visited the castle and the sanatorium.

The prestige of the centre kept on growing, and in February 1914 several promotional notices made of tiles were placed in the passage of the building which used to house the headquarters of the newspaper Faro de Vigo. Among them, there was one of the Sanatorio Lluria. The famous artists Joaquín Sorolla and Mariano Benlliure stayed in the centre in July of that year, while the “young English aristocrat Mr. Wright” was there. At that moment, the popularity of the sanatorium had gone beyond the regional and national boundaries, and in the spring of the year 1915, Hermann Minika, First Officer of the German Merchant Marine, wrote a letter to a fellow citizen where he described the beauty of Soutomaior, its castle, its gardens and the sanatorium.

The centre continued improving and some new amenities were incorporated in 1915. In fact, in the promotional leaflets of the winter’s campaign, it was announced that it boasted “a wood central heating system, electrical lightning, a gramophone and a film projector to make the patients’ stay more pleasant, comfortable…”

The sanatorium became so popular that the couple decided that it did not need to be promoted any more, and thus, its last promotional message appeared in the press on the 7th November 1915. In the summer of 1916, its activity increased, mainly due to the outbreak of World War I, to the point of forcing María Vinyals to work in the sanatorium and collaborate in the patients’ assistance.

By that time, Doctor Lluria’s centre had reached its zenith.

The sanatorium closed down in 1917, but the reason behind it is not clear. In a letter that María Vinyals sent to María de Maezty in September of that year, Doctor Lluria’s wife wrote about the family’s intention of leaving Soutomaior, as she asserts that her personality does not let her “live isolated from the outside world”. The political ideology of the couple may have also been connected with their decision, as this was starting to cost them some problems.

These reasons would lead them to abandon Soutomaior. In addition, back then, the family was going through a very difficult economic situation, and the threats of seizure would finally cause that their property was put up for public auction on the 7th October 1917. Towards the end of the year, the family left their Galician house, and at the turn of 1918 they were already living in Madrid.

The family’s departure meant the end of the sanatorium, as the following owners would not be interested in running the centre. Today, the building that once housed an internationally renowned sanatorium endowed with the most modern facilities has become a historic hotel.